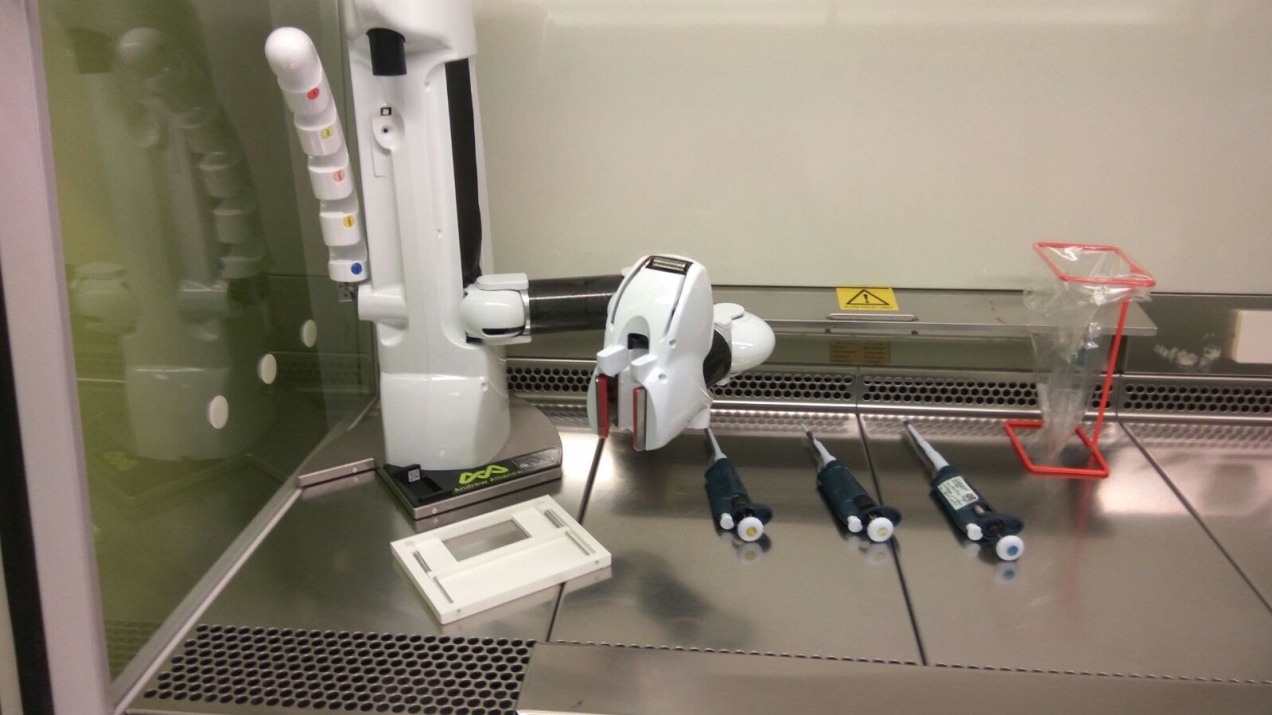 Andrew Alliance’s Andrew, is an impressive little automatic liquid handling robot. For example, my friend who works in a cancer research lab, uses it extensively in his everyday wet lab experiments. One of the problems associated with these sophisticated robots is that they have a very high cost for their accessories. In Andrew’s case, it uses a spring loaded tray to hold a PCR tube/ tip holder box. This tray doesn’t have to do anything other than holding the box in its place firmly. The company priced it over 300£ which is not well justified. If there is anything that is a bit complicated, is the tray that uses the tension of the spring to hold the box in its position. That’s is all about it. It has no electronic component or anything that could push the price over £10, still these companies price it for over £300. Don’t forget the VAT, import taxes, shipping time and costs involved. 3D printer. These reasons lighted up a solution for us here. We’ve decided to 3D print the holder and fix a spring to it. It took me no more than 2 iterations and now we are flying. While it took a little more time than expected to get the spring to function properly. However, I found what I needed in a knit shop- a small railing that need to hold the spring axially. That’s it and the holder is now in my friend’s lab, doing what it is supposed to do, hold the box in its position. It’s funny how such things are so simple and still these companies price them so high. However, with the advent of DIY 3D printers our jobs are getting simpler, reducing the time and costs involved.

What I’ve learned from this little experience is that, many such accessories, like the Andrew’s tip box holder in this case, once we know how to 3D print and design a few simple designs we could make as many of them as possible. We were able to make 3 holders for less than $30 and in no time. 3D printer made this look a kids play project. This little example, shows a perfect use of 3D printers in scientific labs or for printing DIY stuff for your own daily needs.

Credits: Vamsi, for throwing the problem and providing the feedback. Uday, for his help with fixing the rails and springs

Its a different game

At the starting of the project I was thinking that it will be fairly straight forward to hook a NEMA 17 stepper motor to Arduino/Raspberry Pi. After all, I have an experience of connecting a 24byj48 stepper motor to both Raspberry pi and an Arduino, without any fuss. The beauty of this 24byj48 stepper motor is that it comes with its own driver board, all including just for $3 (thanks to China). That gave me confidence, that even if I burn it, I don’t mind.

now I have a NEMA 17 motor, which is mostly used in 3D printers and CNC machines. It costs around $40 (when we buy from a well known vendor, not from ebay). Now the problem is choosing a correct driver board, as this motor does not come with its own driver. Moreover, Arduino/Raspberry Pi cannot directly supply the enough juice to run these motors.

Choosing a correct driver board

After stumbling upon few options, I found that Poulou’s A4988 driver is most appropriate (thanks to Google). I know people running NEMA 17 with L293D chips (I used them a lot in  my robotic projects to run DC motors). But I am really worried about the shiny (and costly too) new motor, and I definitely don’t wanna burn my NEMA 17.  So, I finally ordered A4988 driver board.

I followed an excellent connections map (and also the Arduino code given there) from this post on Arduino forums. Almost in every hacker blog/forum, this diagram is posted. I powered my board with 12V wall adaptor. I was thinking that, I was giving enough power to motors. But motor did not rotate at all. I checked my connections, rechecked…and rechecked.

My 12V wall-adaptor does not output enough current output. I don’t know, how I failed to check this minor detail. Anyhow, I have replaced the power source with a 8 AA battery pack. And it rotated. I rejoiced and wanted permanent connections, instead of messing up everything on  a bread board with lose connections.

When I soldered everything on a prototype board, for some odd reason, which I have no clue even now, motor did not rotate at all. I was frustrated. First sign of failure. Went back to breadboard, abandoning the prototype board. I reconnected the motor pins and exchanged connections, quite a number of times.  I hate my hacker mind for tempting do this.

There is a small warning that says, we should not plug or unplug a stepper motor, when the driver board is powered. I learnt this after reading few forum posts, carefully. What happens, if you ignore the warning. Simply your driver board will be fried. And it happened to me.

How I solved it:

Simply ordered a new board, which arrived in just 2 days, thanks to a ebay UK supplier.  Now with the new motor driver, I have taken at most care and connected every according to the above circuit diagram. My motor is finally running.

still there is a small problem. Motor is vibrating while rotating. It is no where near to smooth running. Googled again patiently. The solution suggested was that interchange the connections going to the Motor. Now, I have checked spec sheet of the motor, colour code of NEMA 17 wires and read quite a few forums. Result is that, interchanging the motor pin connections simply wont work. Back to square one. I suspected that Arduino code might be a problem.

I have changed now to an excellent stepper motor library written by good guys at Adafruit. I installed the AcclStepper library and it worked like a charm. Finally, my stepper motor is now running smoothly. After spending almost 4 late nights, I figured it out. I am ashamed to waste so much time on such a simple task. But that is how a newbie scientist learns.

Simple Arduino code to test the running of the stepper motor

Now to get smooth rotation of the motor, I have used the following code, which makes use of AcclStepper library.

Although Machine learning appears as a high-tech term, we come across it every day without knowing it. For example tasks such as filtering of spam mails, automatic tagging of facebook photos are accomplished by Machine learning algorithms.   In recent years a new area of Machine learning, known as deep learning is getting lot of  attention, as a promising route for achieving artificial intelligence.

Until recently this knowledge of deep learning is confined to only big data centers. This is because,  the deep learning technology requires large amount of data sets, which only big data mining firms such as Google, Facebook, Microsoft have access to. To keep this technology in every one’s hand, a new startup  Jetpac  has given the access to their deep learning technology to everyone with a computing device (check their app). This is exciting because, many people have  mobile phones, which have so much of computing power. Just see what can be done with such kind of democratization of technology in the above video.

Now coming to the Raspberry Pi, it has roughly 20 GFLOPS (almost same as the Parallela board offers) of computing power, thanks to its GPU. After Broadcam has released the documentation for the GPU specs, Pete Warden has done a great job by porting his Deep Belief Image recognition SDK to the Raspberry Pi. Today after seeing about this post in the Raspberry Pi Blog, I have tried to follow his instructions and successfully run the first example on my Pi.

This algorithm requires at least 128 MB of RAM dedicated to GPU. To allocate that, we need to edit /boot/config.txt. We do it by using the following command

Then add the following line at the end of  /boot/config.txt

save and exit the editor. Now we have to reboot the Raspberry Pi to get a ‘clean’ area of memory.

We are now ready to install the Deep belief. Just follow the below instructions

That’s it. You have installed one of the best Machine learning algorithm on Pi. Now to test whether everything is working or not, hit the following commands.

If everything goes well, you should see the following output

Pete Warden has explained how to implement this algorithm for various applications on Gitgub. I would like to use this for my Robotic project, so that my robot can recognize the objects around it, just like the Romo in the above video. I am planning to do this with Open CV.

If you don’t allocate sufficient RAM for GPU, you may get the following error.

In the below video we can see the object avoiding Robot and how it is changing its direction either by sensing my hand or the walls in its way. The principle behind this object avoiding robot is very simple. Notice the ultrasonic sensor, which look like eyes at the front of the robot.  You might know about ultrasonic diagnosis. We use a similar principle here. One of the eyes is an ultrasonic source that shoots an ultrasonic pulse, in simple words a sound wave. If this sound wave hits any object in its way like my hand or the wall, it gets reflected. Then the second eye listens to this reflected echo of the sound wave. If there is no object in the vicinity of the sound wave we sent, nothing comes back to the second eye. I will explain in the next post how the Robot is able to change its direction after detecting an object in its way.

PS: Sorry for the shaking of video. It shows my video editing inexperience.

PPS: Please give your feedback.